Two recent studies confirm some of the points we have made about how to regenerate bone in an extraction socket. Let’s start with the first:

This study evaluated the effects of placing collagen or oxidized cellulose in an extraction socket. In dentistry, many animal collagen products are made for filling extraction sockets and are usually marketed as collagen plugs with or without graft material embedded in the bovine collagen. Two products that are composed of oxidized cellulose are BenaCel and Surgicel, marketed for surgical hemostasis. In the article, they provide a good literature review of these materials.

“However, in a cutaneous wound healing model, Anselme reported that the remaining collagen sponge was surrounded by foreign body giant cells with granulation tissue 1 month after insertion into the pocket under the skin in the dorsal median zone (Anselme et al., 1990). Moreover, residual collagen in bone was noted 2 months after surgery in a dog iliac crest defect healing model (Finn, Schow, & Schneiderman, 1992). Thus, collagen is not a good biodegradable material. Oxide cellulose has been considered to be a good socket-filling material for its absorbability, as it can be completely absorbed in 28 days as reported by Howk et al. in a swine bleeding model (Howk, Fortier, & Poston, 2016). However, due to its highly acidic properties, this material leads to the lysis of erythrocytes (Achneck et al., 2010; Bjorenson, Grove, List, Haasch, & Austin, 1986) and promotes an inflammatory response (Jamborova et al., 2008). Furthermore, Armstrong and Ibarrola have demonstrated that oxide cellulose inhibits the healing of bone defects in the tibia of rabbits and rats (Armstrong et al., 2010; Ibarrola, Bjorenson, Austin, & Gerstein, 1985).”

The data demonstrated that the haemostatic agents delayed early extraction socket healing via compressing the periodontal ligament, inducing apoptosis (cell death) of periodontal ligament cells and retarding the migration, proliferation and osteogenic differentiation of stem cells from the PDL.

The extraction socket was almost filled with newly formed bone on day 14 in the control group (no graft) (below, Figure 1e). However, the insertion of hemostatic agents compromised early socket healing with residual materials detected in the sockets on day 14.

Runx2 and Osterix are two main transcription factors involved in osteoblastic differentiation and bone formation, and the significantly reduced expression of these two molecular markers on day 3 and day 7 in the collagen and cellulose groups supported a compromise by the materials of the osteogenic differentiation of BMSCs and many other cells committed to the osteoblastic phenotype. Thus, the reduced fiber density in the collagen and cellulose groups was associated with the compromised activity (i.e., migration, proliferation and differentiation) of the cells, which in turn impeded the subsequent woven bone formation.

Compression was generated on the PDL by each material which may be a significant causal factor of the apoptosis (death) of PDL cells. On the other hand, the pH dynamics and live/dead cell staining results indicated that oxide cellulose would result in a highly acidic socket, which was another potential factor leading to the apoptosis of PDL cells. It has been established that apoptotic cells are detrimental factors for cellular biological behaviors due to their effect on the microenvironment which would consequently delay the healing of the extraction socket. 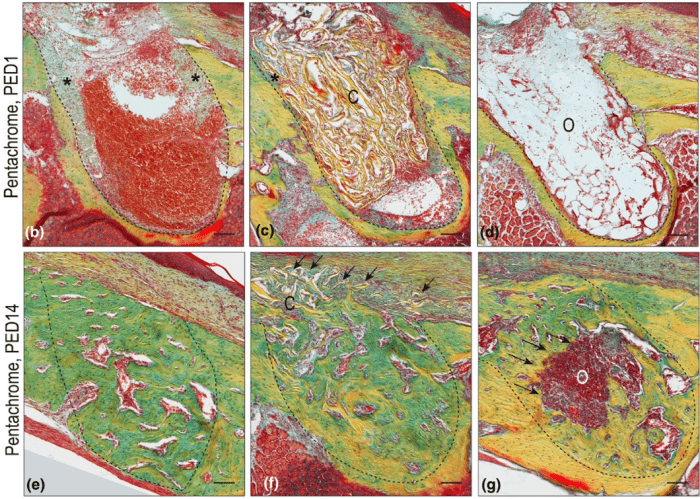 The day 1 control (b) shows an intact PDL (asterisk) and blood clot. The day 1 collagen (c) and cellulose (d) show a compressed PDL due to pressure from the material. Day 14 shows the control (e) filled with bone. In the collagen group (f), the crest is filled with residual collagen. In the cellulose (g) group, the residual cellulose fills the center of the socket.

This was a well done study with good histology and good controls.

The second study we will look at is quite the opposite.

This is a fake Bio-Oss study and nothing can be trusted from this study, but they did have a collagen group that provides for interesting findings.

In the collagen group, no bone formation was found in the socket after one month.

After three months in the collagen group, no bone was formed in the socket, though the socket was covered with a cap of cortical bone. This finding clearly demonstrates how collagen plugs stop bone formation in extraction sockets. In addition, the histology shows that a cap of cortical bone has formed over the socket, which is a common finding of what is referred to as a hollow jaw. It is not uncommon to drill through the crest and fall into soft tissue. This is the first publication that we are aware of that shows a cause (collagen) for what is referred to as a hollow jaw. Combined, these two studies clearly make a number of points:
We mentioned how poorly the second study was performed and we did not take any results or conclusions from the second study. The problem we have is that it was published in the Journal of Periodontology, which touts its scientific acumen. The publication of this study by the Journal of Periodontology is a prime example where bias can blind. Periodontists are only trained to use cadaver bone grafts and they are desperately holding on to this technology because this is what they were taught, what they teach, and the only bone graft they know how to use. Let’s take a look at this article further. The study was paid for by the Osteology Foundation, which was formed and owned by Geistlich (Bio-Oss). One of the lead authors is on the board of the Osteology Foundation, yet the authors state they have no conflict of interest. How does the Journal of Periodontology allow an author who is paid by the marketing arm of Bio-Oss and is on the board to claim he has no conflict of interest? The article included no negative controls (no graft). This was an animal study and there is no reason not to have proper controls, but Bio-Oss does not want to show that no graft significantly outperforms Bio-Oss. So, they either had a no graft control and did not report the findings, or they purposely designed the study to not have controls. However, the most egregious part of the study was the intentional effort to cover for the false narrative that Bio-Oss contains no proteins. However, Bio-Oss is full of animal proteins, so let’s look at how this is covered up in the article. First, they use a very low power magnification so you cannot see any cellular structure, but they also destroy the histology by over demineralizing it. The histology was demineralized for one month, which creates large artifacts and results in destroying cell structure so you cannot see the proteins in the Bio-Oss granules. Over demineralization causes proteins to clump up and stain deep red, which you will see in the following histology.

Section L at 1 and 3 months shows a Bio-Oss particle with a very large artifact around the clump of Eosin-stained Bio-Oss proteins. Normal histology would show a Bio-Oss particle filled with matrix proteins. If the particle was all mineral, there would just be a void with nothing in it but even the damaged histology clearly shows the matrix proteins in Bio-Oss. Not only do the authors ignore the clumped proteins in the histology but they fail to note the remarkable poor quality of the bone produced by Bio-Oss.

The most appalling aspect of the publication is that the authors are allowed by the peer review board to state in the title that the material is deproteinized. Bio-Oss managed to mislead the dental profession into believing there are no proteins in Bio-Oss with the statement that it is anorganic. Dentistry accepted that anorganic means no protein, but anorganic only means that the material contains inorganic material. Bio-Oss no longer puts anorganic on its packaging. We have never seen Bio-Oss say it is deproteinized because that would be outright lying, punishable by the FDA. Bio-Oss relies on ignorant authors to state that it is deproteinized and an uneducated profession to swallow this misinformation. What is amazing is that no one at the Journal of Periodontology knows Bio-Oss is full of proteins and as a result of this lack of knowledge they allow this misinformation to be promoted through a Bio-Oss funded study.

Dentists do not understand that these animal proteins are what causes dense sclerotic bone. The intense inflammatory reaction caused by the animal proteins produces dense sclerotic bone that is not a healthy and vital environment to support a dental implant. The following histology is from a human site where the graft failed and the implant was lost. The histology is demineralized and you can clearly see the matrix proteins in both the allograft and Bio-Oss particles. The Journal of Periodontology should retract this study. 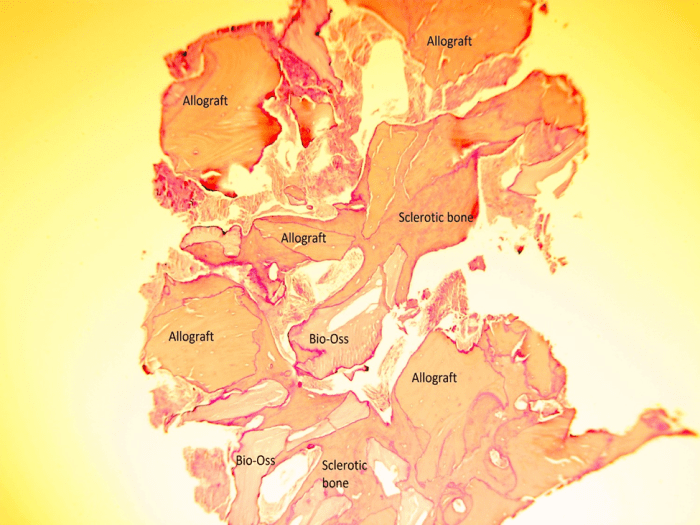