Most clinicians know that a critical size defect study is when defects are created in bone that will not heal without treatment. This type of study allows us to compare the performance of a bone graft material to a site that has had no treatment. However, few clinicians know what a non-clinical GLP study entails. Non-clinical means the study was done on animals, not humans. GLP states the study used good laboratory practices. Non-clinical GLP studies are not done in academia because of the high cost and extensive monitoring the study requires. In a non-clinical GLP study, all protocols must be registered with both the FDA and USDA. Multiple in-person visits are performed by both the FDA and the USDA to ensure the study is being performed properly. Committees are formed to write and monitor the study. An independent Quality Assurance Unit must be hired to monitor all in-house activities, all specimen collection, and all documentation. These studies are done only when the material in question will be submitted to the FDA for clearance. When academic studies are performed, the reader of the study trusts the researchers performed and collected the data accurately. In a non-clinical GLP study, there is no trust. In 2016, SteinerBio initiated a non-clinical study in order to clear its dental bone grafts for use in the skeleton. Of all the tests required, the non-clinical GLP study is the most extensive, most costly, and the most important test required for submission. The primary purpose of the study is to document the inflammatory response to the material to ensure it is safe for use. Another aspect is to ensure it is effective in producing the desired result, which is to grow bone. None of the evaluation of the samples is permitted to be done by the sponsor (company) of the study. For this study, all samples were evaluated by an independent GLP laboratory that specializes in histopathological tissue analysis. The FDA requires that the test material be compared to a known graft material. We chose a common mineralized freeze-dried bone allograft for comparison. The time-period for evaluation was when the bone is in the active process of mineralization. The following table was produced by the laboratory who performed the analysis: 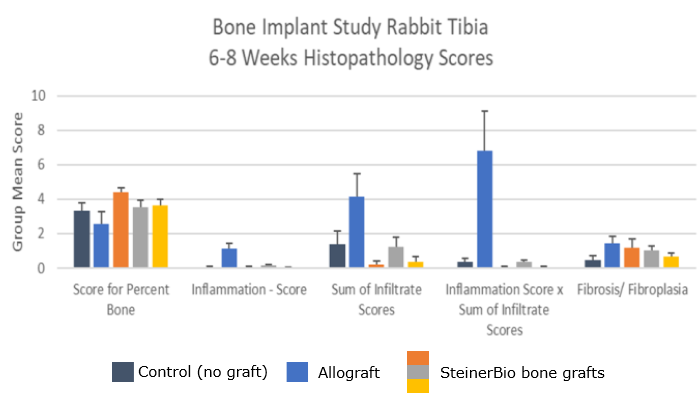 Anyone who knows anything about bone knows that normal bone cannot form in the presence of chronic inflammation as in periodontal disease, osteoporosis, and osteoarthritis. However, in these diseases the agent that causes the resorption are cytokines (molecules) produced distant from the bone. The inflammatory cell infiltrate that is producing the cytokines are not in the bone. Osteoarthritis is most like allografts in the type of bone formed. The inflammatory infiltrate is in the synovial fluid and is made up primarily of lymphocytes, resulting in sclerotic bone formation that can end with total knee replacement. However, with allografts the lymphocyte infiltration is actually in the bone and on the bone that is forming, yet our profession somehow thinks that this will produce normal bone. The only excuse the profession has is that no one in the profession has seen histology of allografts mineralizing. The following histology is bone mineralization of a site grafted with a mineralized freeze dried bone allograft from the study:

Allografts are neither osteoinductive nor osteogenic in humans and this finding is supported by studies (references upon request). There is not a single publication that has found that allografts are osteoinductive or osteogenic in humans. This study shows that allografts inhibit bone formation, but that is not the problem. The problem is that these materials produce sclerotic bone that can breakup and result in implant loss. There are no published long-term studies that have studied implant success rates in sockets grafted with any cadaver bone graft material, yet there are published success rates for implants placed in SteinerBio bone grafts: 100% success after 3 years in function. No histological studies have ever shown cadaver bone graft remodeling into normal bone and no remodeling of cadaver bone graft sites were found in this study. However, in this study it was common to find sites grafted with SteinerBio materials in the process of remodeling, as you see in the image below where woven bone is remodeling into lamellar bone with a complete lack of inflammation: 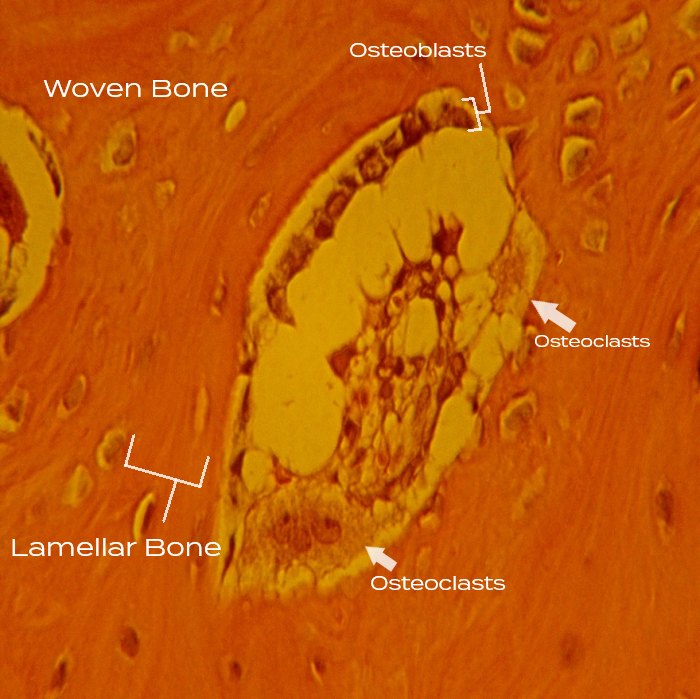 There has never been any scientific support for the use of any cadaver bone graft placed in sockets to support dental implants, yet every dental school and most every lecturer tells you that it is what you need to do. However, there has been progress. I have had extensive communication with a few prominent lecturers about the lack of scientific support for cadaver bone grafts and the failure of sclerotic bone. These lecturers have taught the importance of grafting and use of cadaver bone grafts their entire careers. Now, however, they are teaching how to not graft, and that is progress. They are unable to tell you that what they have been teaching you for their entire career is wrong, but at least no graft is better than a cadaver graft. Will someone in the profession stand up and admit that the profession has been wrong about cadaver bone graft? Maybe, but we know for sure that when the public learns that cadaver bone grafts produce pathologic bone that never turns into normal bone, that the success rates of implants placed in these materials have never been studied, that the bone can break down and the implant lost, and that the cadaver bone is never resorbed, the public will force change and it is going to happen sooner than the profession is prepared for.