The Importance of Biocompatibility

What is biocompatibility? Everyone has a vague idea of what the term means but you will never get a clear precise definition of biocompatibility. The FDA defines biocompatibility as:
“The ability of a device material to perform with an appropriate host response in a specific situation.”
The FDA has recently made clearance for medical devices much more stringent with a much more expanded array of biocompatibility tests needed for market clearance. Nearly all current bone graft products on the market, including SteinerBio products, have never been subjected to this new level of testing. Many drugs, including many bone graft products, have significant side effects. The FDA accepts a certain level of side effects and often accepts very significant side effects when it approves medications and medical devices. However, products that are designed for regenerative medicine are unique from all other products because excellent biocompatibility is required for normal tissue regeneration. For the body to regenerate itself, it must duplicate the biological processes that formed the tissue in the first place and inflammation is never a component of normal tissue growth. If a drug or device produces any inflammation, you will not produce normal healthy tissue. While inflammation is a blocker for tissue regeneration, the concept of biocompatibility encompasses an even greater array of biological processes other than just the inflammatory response. The FDA’s Good Laboratory Practices (GLP) provide regulations by which safety studies are conducted. GLP testing is far more complex than research publications. Extensive protocols are produced that must be in accordance with FDA standards. When producing the protocols, a team of quality control personnel must be employed to ensure the study design is appropriate and followed precisely. Every team member involved in the study must have GLP training by certified bodies. The protocols, documentation, and reports are complex and extensive. The reason for this research complexity is that it makes it possible for the FDA to reproduce the study exactly if it questions the results. SteinerBio is taking its regenerative technology to the skeleton. For our submission to gain clearance for use in the skeleton, we have completed five different studies. Four of the five studies were performed by a specialized testing facility completely independent of SteinerBio. The fifth study was a bone graft study on rabbits. For this study, the FDA spent a week in our facility to review the documentation and approved the protocol. The tissue samples were produced by SteinerBio, but the analysis was performed by an independent testing facility. The tests performed on SteinerBio products for the evaluation of biocompatibility are as follows:

Study
Cytotoxicity tests are used to determine the lysis (death) of cells, colony formation, inhibition of cell growth, and or other effects on cells caused by medical devices, bio-materials, or their extracts utilizing cell culture techniques.

Results
No cytotoxicity or cell lysis was noted in any of the test wells.
No pH shift was observed at 48 hours.
The reagent control, negative control, and the positive control performed as anticipated.

Study
Genotoxicity studies are conducted to detect the risk of gene mutations, change in number or structure of a cell, and chromosomal or DNA damage caused by a medical device, bio-material, or their extracts.

Conclusion
The DMSO and saline test article extracts were considered to be nonmutagenic to Salmonella typhimurium tester strains TA98, TA100, TA1535, and TA1537, and to Escherichia coli tester strain WP2uvrA.

The analysis found that the SteinerBio graft material is sterile and produces no genetic changes or changes is cell structure.

Study
Sensitization tests are utilized to evaluate the potential of medical devices, bio-materials, or their extracts tissues to cause a sensitizing effect or allergic reaction following exposure. 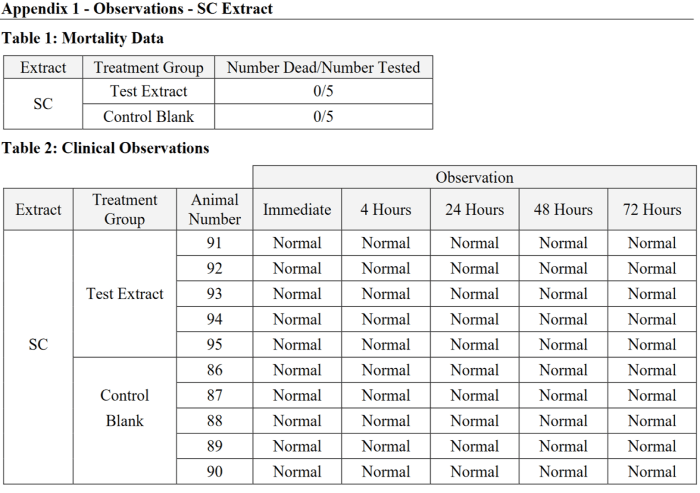 Conclusion Test results show a lack of any systemic tissue toxicity to the SteinerBio graft material.

Study
This study requires the use of a comparison graft that is currently on the market. The comparison graft material used was mineralized freeze dried bone allograft. The surgical phase of the study was performed at the SteinerBio vivarium. The analysis of the tissue sample was performed by an independent histopathological laboratory. 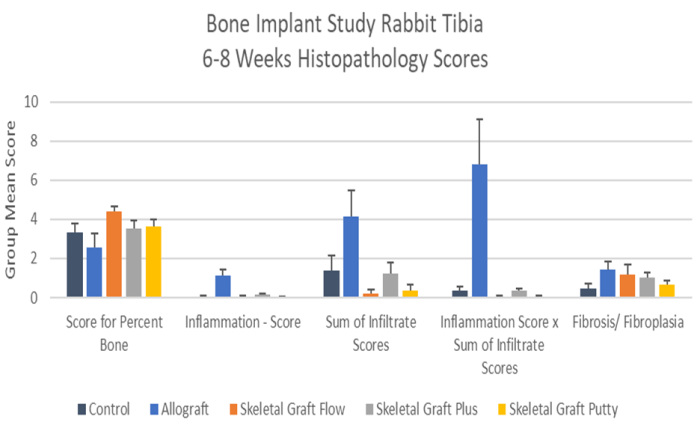 All SteinerBio formulations out-performed both the control (no graft) and nearly doubled the bone production of the allograft sites. When using a control as a baseline, these findings show that SteinerBio bone grafts stimulate bone growth and allografts inhibit bone growth. The three graphs on inflammation show that SteinerBio products produced less inflammation than the controls and the inflammation produced by allografts are dramatic. The final chart shows that allografts produce the largest amount of fibrosis. This study demonstrates that SteinerBio technology reduces the inflammation when compared to no graft, in addition to accelerating bone formation. The biologic activity of SteinerBio products was designed to reduce the inflammatory response to surgical intervention, and stimulate osteogenesis as confirmed by this study. With the completion of these studies, SteinerBio technology is now one of the most studied bone graft material on the market. SteinerBio products were designed for the future of bone regeneration that practices regenerative medicine to restore the patient to normal form and function. The biologic activity of SteinerBio technology not only reduced inflammation over controls, but stimulated bone formation over controls while cadaver bone grafts were found to inhibit bone formation over controls in the presence of profound inflammation. The studies documented SteinerBio’s technology to have complete absence of any negative effect on any test subject. The summation of the studies found SteinerBio products to exhibit perfect biocompatibility.
Why is biocompatibility important?
Biocompatibility is obviously important to the health and welfare of the patient. The more biocompatible a material is, the less potential for harm to the patient. When regenerating tissue, biocompatibility determines the quality of the tissue. Perfect biocompatibility produces normal healthy tissue. The less biocompatible the material, the greater the degree of scarring in the immediate area of the material and the greater the potential for systemic toxicity. The allograft used in the fifth study failed the biocompatibility test, but what are the tissue and clinical ramifications of this lack of biocompatibility? Allografts contain all of the components of the donor’s bone and all transplants elicit an inflammatory reaction in the host. In the tissue, this inflammatory reaction produces sclerotic bone (scar tissue) that never remodels and for good reason. If the sclerotic bone that encases the allograft particles is remodeled, the graft particles that created the sclerotic bone would expose the allograft particles, producing persistent inflammation. The purpose of the mineralization produced by allografts is not to produce a functional tissue, but to isolate the inflammatory agent from the host. Clinically, the lack of allograft biocompatibility is related to an increase in implant failure. While the success rates of implants placed in sockets grafted with allografts has never been studied, we do have good data from reimplantation studies:

Successive Reimplantation of Dental Implants Into Sites of Previous Failure

What this study mentioned but failed to discuss is that all failures were grafted with allograft when the failed implant was removed. The only thing this study proves is that if you continue to graft with an allograft, you will get a progressively worse failure rate. Many clinicians have used this study to claim that reimplantation results in increased failure rates, but this is a completely inaccurate conclusion. The study only says that reimplanting in sites grafted with allografts results in increased failure rates. Allografts produce a significant area of sclerosis beyond the extraction socket and to overcome the negative effects of the allograft, the entire sclerotic bone needs to be removed and grafted with a biocompatible bone graft material.

While allografts produce sclerotic bone, Bio-Oss produces a much higher level of sclerosis. The degree of sclerosis is related to the severity of the inflammatory reaction to the non-biocompatible material. Allografts, when grafted within species, produces sclerosis because of the lack of biocompatibility of the donors proteins. Bio-Oss produces a more intense sclerosis as a result of the animal proteins contained in the mineralized structure. The mineralized portion of bone is simply a mass of mineralized proteins. Because the proteins found in the mineralized structure of Bio-Oss are cross species (animal to human), the sclerosis is greater than allografts and is commonly diagnosed by Oral Radiologists as sclerotic bone.

In the past, Bio-Oss claimed it was anorganic. This lead many dentists to believe that there were no proteins in Bio-Oss, but in our opinion, that was the intent. However, the term anorganic does not mean that the material is devoid of organic material, but instead means that the material contains inorganic material. What dentists do not understand is that the reason they use Bio-Oss is because the presence of animal proteins produces significant inflammation that results in an increase in hardness. Again, dentists do not understand that the mineralized component of bone does not contain regenerative cells that are required for integration. Sclerotic bone has a high mineral content that produces a higher degree of hardness, but that hardness is acquired by the sacrifice of bone vitality and poor reimplantation rates of success. Hard calcified bone is not healthy bone and especially not good for implants to survive for the life of the patient. This is the reason the FDA does not allow implants to be placed in sites grafted with Bio-Oss. In the US, Bio-Oss uses unsuspecting dentists to promote implant placement into their material because the FDA will not allow the company to promote their material for the support of dental implants.

SteinerBio products were designed for the field of regenerative medicine that requires a high level of biocompatibility. The current testing has found that SteinerBio bone grafts are completely biocompatible which results in normal bone but also assures your patients they are receiving the safest material for the health of their bones but also their entire body.

For those dentists that have patients who want to be assured of the safety of the material being placed in their bodies, SteinerBio biocompatibility test results are available upon request. As a dentist concerned about your patients welfare, you should also request the safety results of any graft material you are placing in your patients.