This article is directed more toward university professors to assist them in understanding the bone tissue samples they view histologically.

Sclerotic bone is a common pathological finding in routine radiographs. A common type of sclerotic bone known to all dentists is condensing osteitis. However, there are many different causes of sclerotic bone and they include vascular infarct, infection such as osteomyelitis, neoplasms, inflammation, genetic mutations, trauma, and metabolic diseases such as hyperparathyroidism and Paget’s disease.

The term sclerosis is defined as

A common denominator of sclerotic lesions caused by inflammation is that they are all protective. They are formed by the body in order to defend itself and contain the damage being caused by the inflammation. In coronary heart disease (atherosclerosis), the calcium deposits are not just areas of mineral deposition in the affected arteries, but actual bone formation. Atherosclerosis results in a buildup of fatty plaques in the artery wall. A coronary infarct occurs when fatty plaques rupture and the contents move into smaller vessels and cause a blockage. In order to stop the fatty plaques from rupturing, bone is formed around the plaques to prevent their rupture. The bone formed in atherosclerosis is a result of inflammation causing the conversion of smooth muscles cells in the artery wall to convert into mineralizing cells. The bone formed in our artery walls is irreversible due to the lack of cells that can resorb the sclerotic bone. If chelation therapy, which is designed to remove the bone mineral in the arterial wall, were successful it would likely result in a significant increase in the potential for a coronary infarct, which shows how a little knowledge can be dangerous. 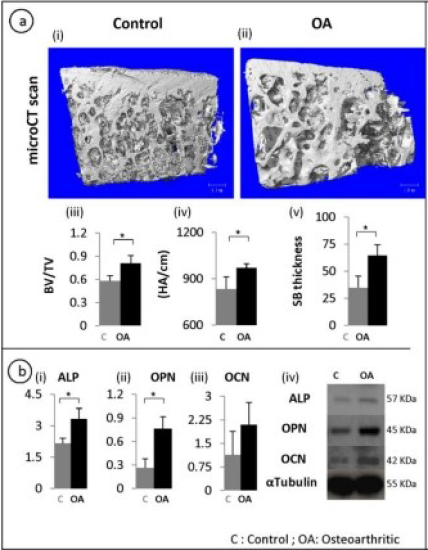 Sclerotic bone is structurally and physiologically different from normal bone. Sclerotic bone has an increased trabecular number and thickness, decreased trabecular spacing, increased stiffness, and reduced hardness when compared to normal bone. This microCT scan shows an increase in bone volume compared to total volume with an accompanying increase in mineral density and trabecular thickness. Physiologically, there is an increase in molecular markers alkaline phosphatase, osteopontin, osteocalcin and a decrease in sclerostin, all of which are associated with increasing bone formation.

Osteocytes control bone formation and resorption and significant differences can be found in osteocytes in normal bone versus sclerotic bone. 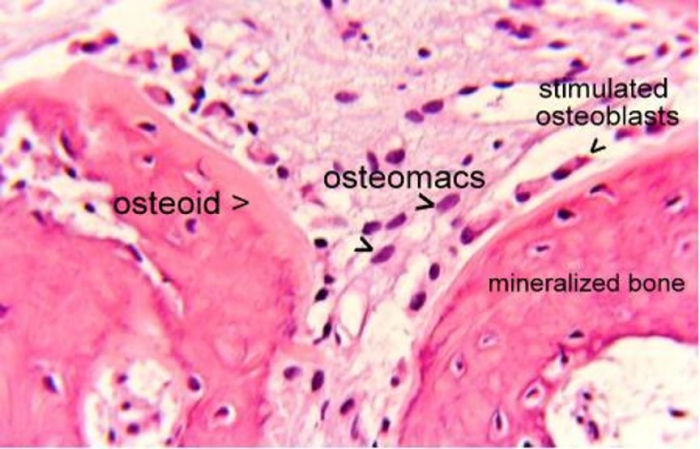 This photomicrograph is from a socket grafted with Socket Graft™ after 6 weeks. The osteoblasts are lined up on the surface of bone secreting osteoid. The normal osteoblasts are cuboidal in shape and form sheets over the osteoid. Note the lack of inflammatory cells. 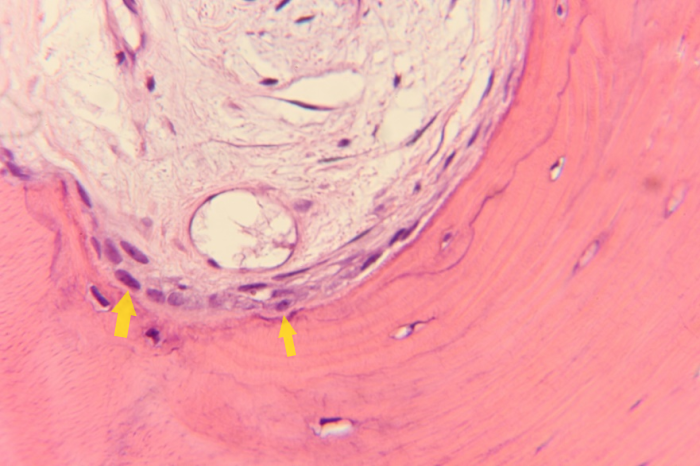 This photomicrograph is from a remodeling site in the mandible. The osteoblasts are again cuboidal in shape forming a sheet on the osteoid that is being secreted over the mineralized bone. No inflammation is present. 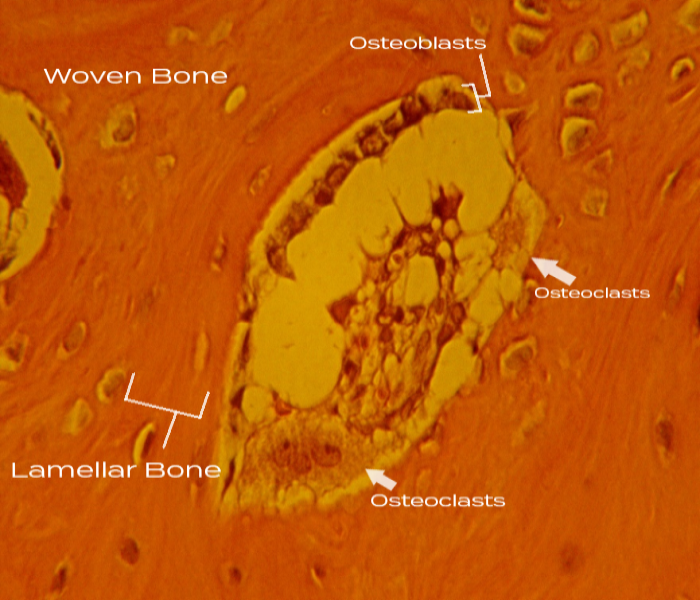 Again, normal osteoblasts line the upper portion of this photomicrograph. The cells are cuboidal in shape, forming a sheet over the mineralized bone. An osteoclast is found in the bottom of the soft tissue. Note its relative size compared to the osteoblasts. (New Zealand White rabbit at 6 weeks grafted with Socket Graft™) 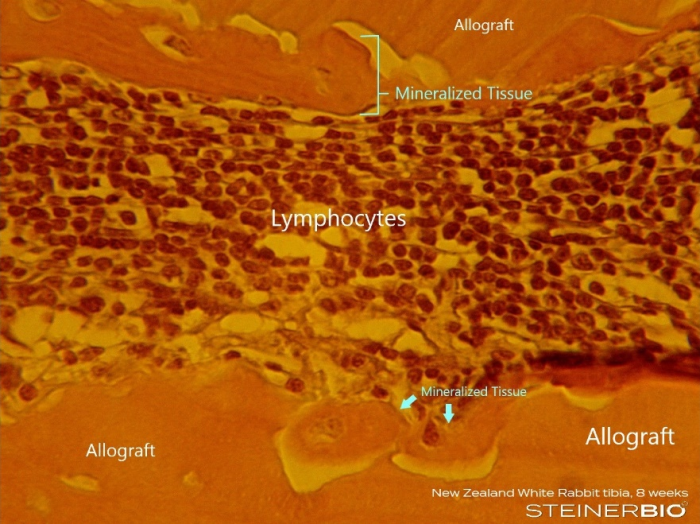 When osteoblasts form sclerotic bone, the cells are round and separated. The cells do not form sheets. The osteoblasts secrete osteoid around the entire cell and encapsulate each cells in mineralized tissue. Note the mineralized tissue with encased osteoblasts. The intense inflammation is obvious. (New Zealand white rabbit grafted with mineralized allograft) Bone remodeling is very organized with close orchestration of bone formation by osteoblasts and bone removal by osteoclasts. 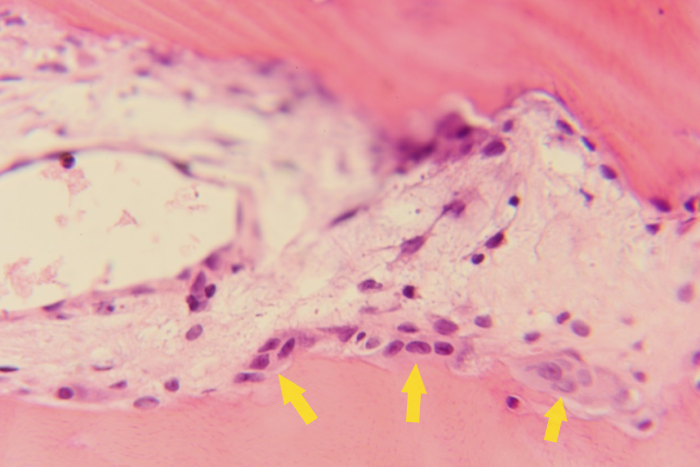 The bottom of the soft tissue in this photomicrograph is lined by osteoclasts. Note there is no inflammation. 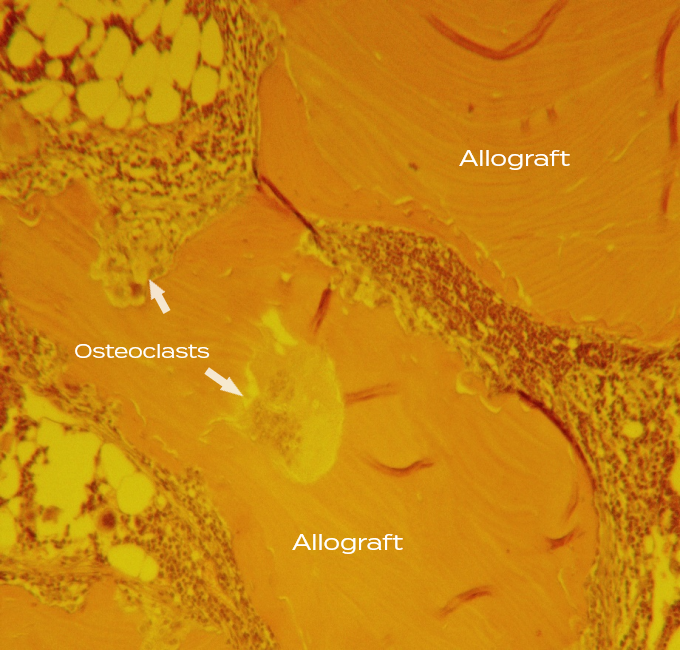 In sclerotic bone, remodeling is disjointed. There is no communication between osteoblasts and osteoclasts. In the early phase of sclerotic bone formation, osteoclasts are huge and not associated with a basic multicellular unit. In the center of the photomicrograph is one osteoclast. This cell is the largest cell we ever identified. 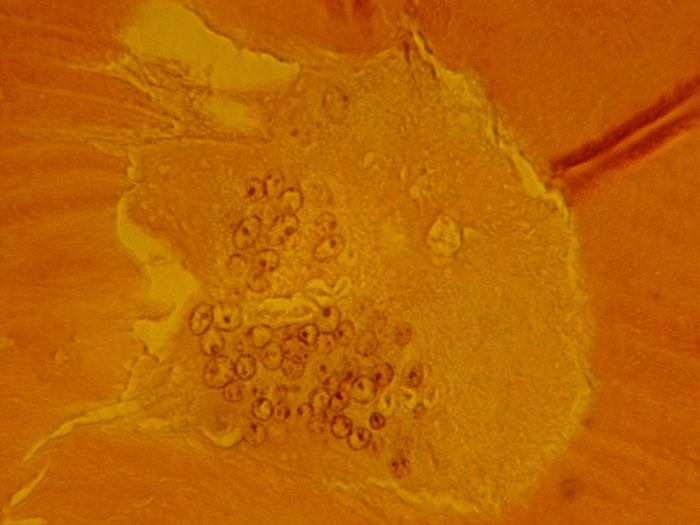 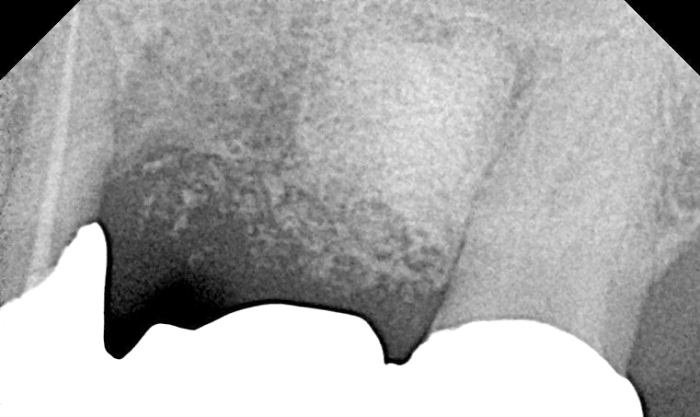 An obvious sclerotic lesion is found mesial to the molar. 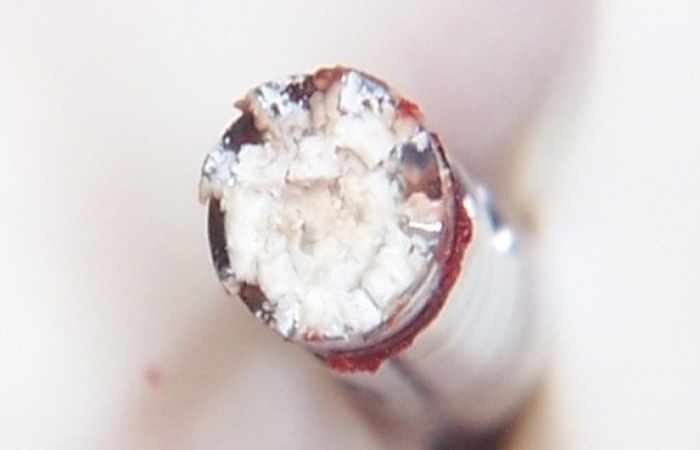 A bone core sample is taken from the lesion. As is typical of sclerotic lesions, very little blood is present in the sample tissue. 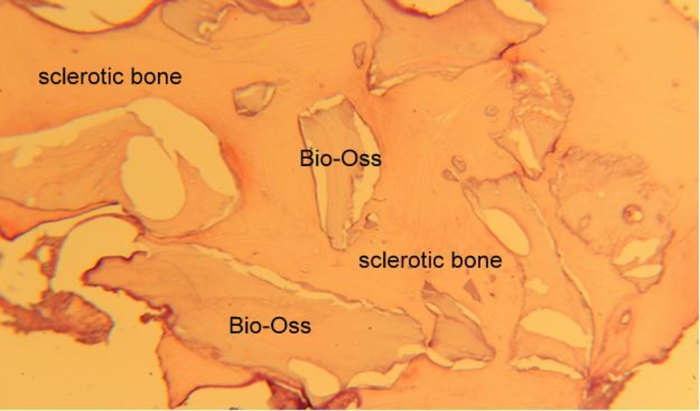 The histology is typical of sclerotic bone that is produced by an inflammatory reaction to the implanted foreign proteins found in cadaver bone grafts. In this case, the sclerosis was created by a xenograft. The characteristics that allows the diagnosis as sclerotic bone is the lack of vascular supply, absence of osteoclasts, and absence of remodeling. Upon communication with the treating clinician, it was confirmed that the site was grafted with Bio-Oss 10 years prior. 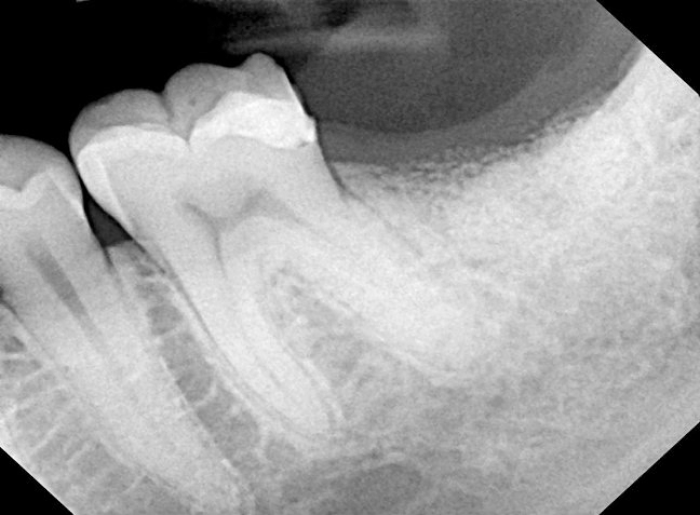 Sclerotic bone lesions present with varying amounts of radiopacity. Typical of sclerotic lesions this lesion is surrounded by a distinct radiolucent border. 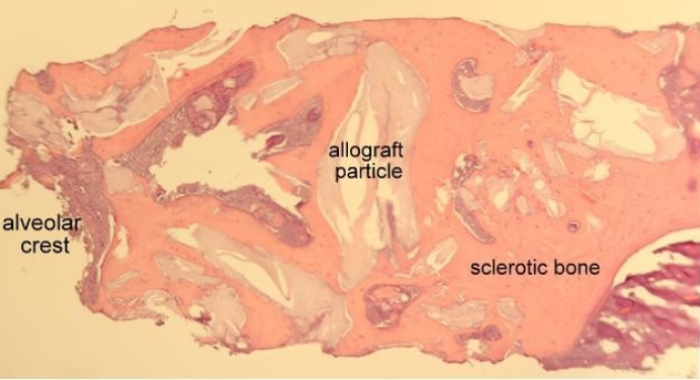